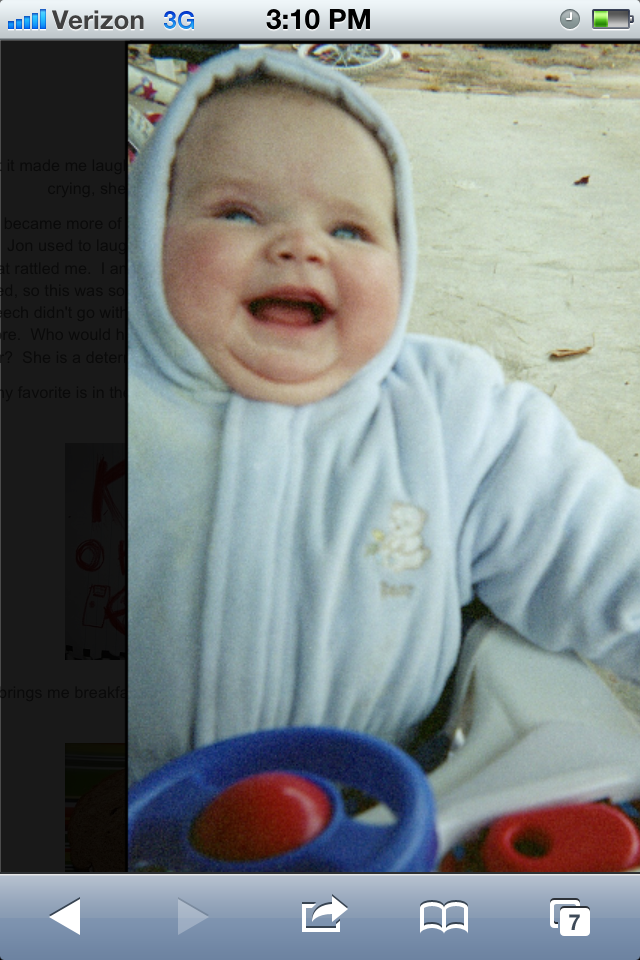 *two of my all time favorite pictures, of my Brighton*

Man, whenever I am in a bad mood, I just pull these keeper’s up on my phone or computer and laugh the rest of the day.  Brighton had 3 rolls on her chin, THREE.  I had to lift each one up to clean them, so milk didn’t get stuck in the creases and stink.  Brighton was also the child that was so difficult to keep a diaper on, it was a regular occurrence to find duct tape and scissors in her diaper bag,

along with the desitin and tippy cups.

She remains equally as stubborn today, but in other ways.

One of those ways is her determination and passion she has to be a keeper (goalie) in soccer. This is the picture I took at Brighton’s soccer party I threw for their team a few weeks ago.

She was happy.  She fit in, and was so excited to be part of a team.  It has been the first time in her life she has been so dedicated to something, and she wouldn’t have it any other way.

Fast forward a few weeks, to her tryouts.  I watched her give it her all.  She ran out onto the field, ready to conquer the world.  Her hair was pulled up into a diagonal french braid, a style she regularly wears to keep her bright, blond hair out of her face as she jumps, dives, and slides on her side.  She turned and gave me a confident look,  collected her number, and ran off with her athletic friends. It was a hot day, but a nice breeze graced our faces. Mount Timpanogus was our backdrop to the soccer field – a sight that is none less than breathtaking.

What a shock it was to glance through the results a few days later, and not find her name on the list.  My heart fell for her.  I was immediately taken back to the times in junior high when I tried out for cheerleader, and didn’t make it,  and class office, and failed.  In high school, I tried out for drill team, and didn’t make it.   It hurt.  It felt as though everyone were staring, and laughing at my weakness.   I wondered what was wrong with me.  Every part of my soul wanted to crawl under a rock and die.

Jon and I debated whether we should tell her before we went boating last Saturday.  We didn’t want it to ruin her day, but we also knew that she would find out from her friends sooner or later.  We also thought it would be a positive thing for all the girls to give her a hug when she was down, and talk to her about the hard reality of what she faced.

We chose to tell.

She walked out of the bathroom by the laundry room, and Jon and I put our arms around her.  We explained the situation, ready to catch her heart when it fell.  First a look of disbelief, “Are you serious?!” Her eyes were huge.  Her big blue, green eyes welled up with tears, and she cried.  My Brighton doesn’t cry that often, but this was one of those times.  Jon and I looked at each other, and felt her pain.  We reassured her that she gave it her all, and that it wasn’t the last time she would be able to play.  We told her that it may be a good time to decide how committed she was to soccer, and if she wanted to try something else.

Without hesitation, she told us she wanted to stick with soccer.

We began loading the boat, hopeful that the day ahead would bring with it peace and laughter on the waters.  We love boating.  And even though Jon and I started out the day overridden with the stresses of business, and family (and crying a bit myself) – we knew it would be therapeutic for all of us.  Jon and I fell in love on the boat after all.  “Hey, wanna go water skiing?” were his first words to me, without knowing each other’s name.

Have you ever taught yourself something, as you teach your children?  This happens to me all the time.  A power bigger than myself is present as I see the world through their eyes, and in turn, I see myself differently.  I am a little less harsh on myself, and I see more as Heavenly Father would.

This was one of those days.

As we were driving down to the lake, I began.

“Brighton.  I know you are sad, and I understand that it hurts.  When I was younger, I tried out for things and failed over and over again.  I decided to work harder, and eventually made the drill team my senior year.  So, although I don’t still dance (which I complain about every once in a while), I did learn something from all of my failures.  I learned to never give up.  And that skill alone, has blessed my life more than any other lesson I have been taught.”

I knew it was true.  We continued to drive, and I could see that my words were getting through to her.  In my teaching moment, we were both reminded of the far sighted vision it takes to be truly happy. And as I sit and type this blog, I pray that I can stay far sighted.  Life is rough, and I need to always remember *my keepers*