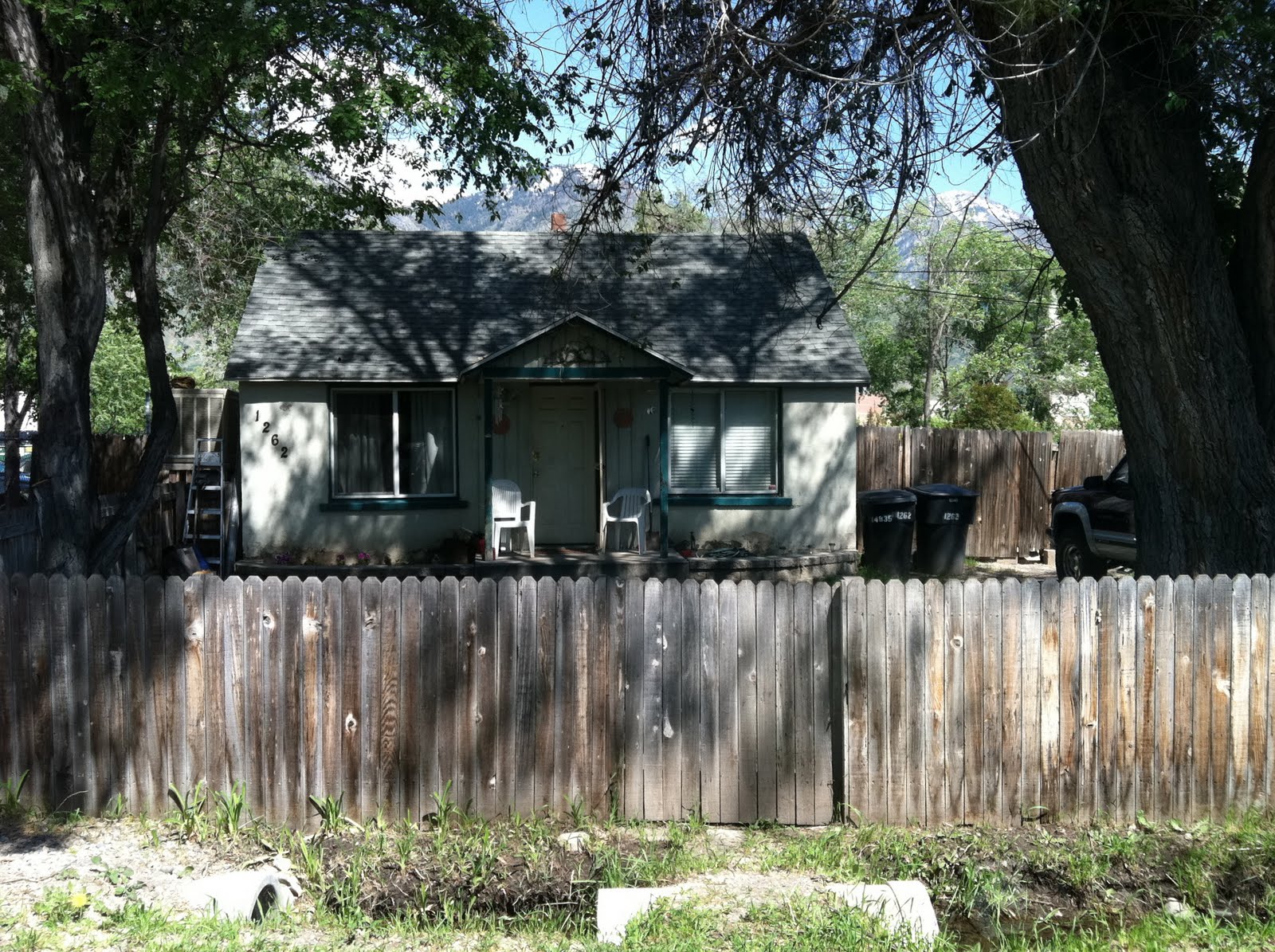 Sometimes in the middle of our crazy life raising seven kids and juggling business, I have to take a step back and appreciate where we have come from.  I really believe that a key ingredient to happiness is gratitude.  If we only focus on what we want or what we don’t have, life can be pretty overwhelming.

Jon and I have been reflecting our journey a lot lately because of several different things going on in business, and reminiscing about all the crazy/fun/horrific things we have weathered together.  This home above was our first, and I am not kidding when I say that it was the size of a tool shed and almost 100 years old.  This is the home we moved into after we were married.  We painted it and made it our own, although it was really owned by Jon’s parents.

Jon surprised me and bought a blue couch to match the blue carpet.  I still remember thinking…

“um thanks…. can I pick the color next time?”

We already had Rooz when we were married, obviously because she is my step daughter, and I had Kinley and Whitney really quick.  We became foster parents of our niece Shauntyl a few weeks after I gave birth to Whitney….SO we had 4 kids in this teeny tiny abode.  There wasn’t even a wall between the bedroom and the front room *so we added one* and we ripped the insulation out the the “upstairs” and welded some little spiral stairs in the corner so we could finish it off.  You couldn’t even stand up unless you were right in the pitch of the roof.  There were no closets or doors but I painted it to look like Noah’s Ark so it would be cute.

I remember shopping at Deseret Industries across the street for clothes for Kinley which is a second hand store.  I bought one plastic set of drawers to hold them and set it by Sydney’s plastic bed.  After a while we added a futon for Kinley to sleep on, Shauntyl slept on the couch downstairs and Whit was in our room in a bassinet.

I am not kidding when I say that we ate deer meat with every dinner….deer meat spaghetti, meat loaf, and enchiladas.  We were given the meat and we couldn’t afford anything else after we lost our first business.  *JR Landscaping* after being given a misfiled prescription. I remember when Jon would give people money to help them out when we couldn’t buy food for ourselves.

If you want to read the whole story it is here… As I look at these pictures my emotions well up inside of me.

I took these with my phone a few days ago and must have looked like a stalker, but I had to have them.  When we were going through all the really hard stuff I didn’t want to record it in my journal.  I wish I had.  It would be invaluable to me now being able to see how I was digesting my life at the time being 22 years old, vs how I think now.  But I couldn’t.  Even writing something down makes you face hard things that are easier tucked in the back of your mind. It is gut wrenching even now to look at these pictures and let that time period into my mind.  Bill collectors are burned into my brain

*how hard they knock on the door and call your name*

I still don’t answer the door if someone bangs too hard.

That is why I have promised myself to record during hard times as well as easy in the future.  Not that I have to publicly share it, but at least for myself.  ,My kids will want to read my thoughts at some point, and it will all be here for them along with more personal, spiritual experiences I will save just for them.  Sometimes I wonder if I am wasting my time here on my blog, and then when I consider slowing down or stopping there is always something that happens to keep me going.

One of those times was today.

I was thinking of the coming summer and wanting to play with my kids and I considered shutting Pink Moss down.  Once again, I had a strong answer given to me and this time it was through my Jon.  He didn’t even know I was contemplating this…but he gave me a blessing tonight and said I should keep writing.  At some point this might not be the case, but for some reason, whatever it is….right now I am.  Everyone *you* seem so distant and almost made up in my mind and sometimes I feel so crazy spending so much time writing on Pink Moss.

But then I look at my “stats” on Pink Moss and realize that 3,600 people have visited my blog in about a week and a half and that is very significant.  That is a lot of people that took time out of their busy day to read whatever random thoughts are in my brain that day.

{I remember painting this mailbox with my new stencils…not much remains, but the mailbox stands} See that nasty ugly added air conditioner…?  That saved my life when I was pregnant with Mack.  Jon added it in about July of the summer I was due with her.  She was supposed to arrive August 11th and didn’t make her grand entrance into this world until 10 days later.

I was 10 days over due!  I tried walking, swinging, Mexican food, and even Castor oil to try and coax her out of my swollen hobbling invaded body.  Yes, that window air conditioner meant the world to me.  Jon has always tried to do everything he can to make my life happy.  Crazy to think that I we have been together now for 17 years. I was looking through old photos the other day and found some proof that we have worked together on the business right from the time I met him at 17.  I turned 18 a few weeks later. I took this picture of Jon at one of our first trade shows together {I love the black magic marker sign for RBM}.  That is why I love Jon more than anything when we walk into a conference room full of men for business and he introduces me as his business partner and wife.  I am realizing a lot of men don’t acknowledge a wife’s part in business.  Jon and I talk about our business a least an hour a day, planning and working through challenges. Jon  is always very sweet when I feel insignificant in situations like these *like yesterday* and says,

“Honey, you know more about our business than anyone of those guys.”

and of course it isn’t true, but I know a lot.  So what is my point to this rambling?  I am not quite sure other than Jon and I have come a long way together.  We are sometimes overwhelmed by our future but looking back at the past fuels us.  We can do it.  You can do it.  Whatever your dream is, SET your mind to it

dial in and don’t turn back

we are all capable of marvelous things if we only believe, be grateful, work hard, and serve those around us.  Last night Jon, mack and I went to get a rollo shake at Mc Donalds *yes disgusting I know*.  Mack and I picked a a red box and passed a man digging for dinner in the trash.  We went and told Jon so we drove around to help him out a bit.

“Hey, come over here I want to talk to you” said Jon

“Do you need a little help?”

“Here you go man.”  {and passed over enough to feed him on the dollar menu for months}

(yes even the homeless man noticed my filthy car)

and with that, the man with one blue eye and a down situation reached into the car and gave Jon a hug.  He was shaking and so excited.

I started to cry

and Jon started to cry

Don’t get me wrong, we aren’t extreme emotional weirdos… we were more choked up than bawling.

I guess that is my point after traveling all over the map in my thoughts today.  Jon works hard to give, we have been through a lot to be able to give, and giving changes lives.  We don’t have to give with money, but any form of giving also makes us happy.  Believe me, if I could cook well I would be taking that to people.

We actually have a new dream now.

We decided with the Leavitts that we want to have food vans that drive around and serve people food that need it.  People can volunteer to cook pancakes on the van or whatever it is that day, but we believe it would change lives.  Then we could plug them into the system to get some help.

anyway this is all far off, but we are on our way one day at a time.