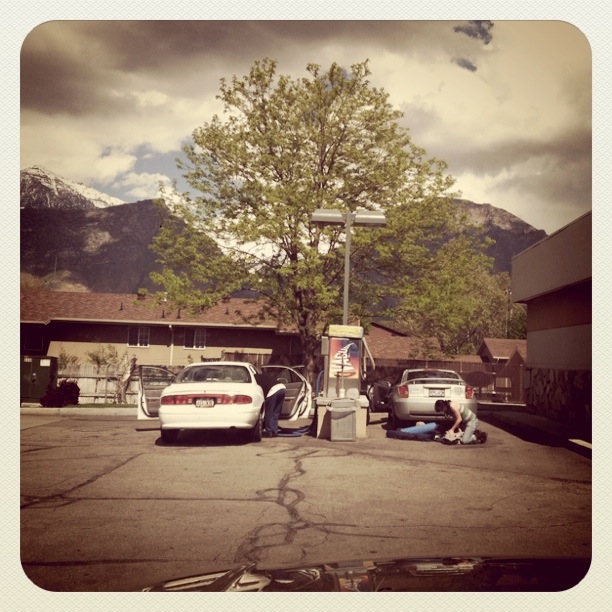 Unless you have been to a U2 concert, you won’t fully get how great it is to hear them live.  The energy that fills the stadium is powerful and moving.  So powerful and moving that my ears were ringing for hours after the show ended.

It was worth the inner ear damage, yes it was.

I actually caught Dave with earplugs and ripped on him for being a wimp.  Someday we will be old and gray, we will fight, I will tease him and make him mad, he will tease me and I won’t hear a thing. I started off the trip to U2 bound and determined to  vacuum my messy car.  After waiting for these two in front of me for no less than 20 minutes, I gave up.  The one of the left is a grandma and could barely move from one side of the car to the other while carrying the awkward hose and the chick on the right..?  She was actually unloading all of her camping gear including tents and air mattresses and sucking all the dirt off.

So much for a clean car.

Jon and I drove up to Salt Lake City and met my brother Dave and his wife Emmy, and my sister Camille and her hubby Paul.  We were all ready to have the time of our lives!  We started out by all of us piling into my messy car and going to Cafe Rio for dinner and all I need to say about that is mmmm mmmmm good.  If you have been there, you know what I mean!

Afterward we drove to tracks, (you have to say it like this… TRRRAXXXsss) which is an above ground transportation train.  We waited in line FOREVER to get on, but all of the cars were already full so a few of us *not including me* decided to run across the road without telling the others *me* until it was a really exciting game of j walking into oncoming traffic.  OK, it wasn’t that bad, but it was funny to look up and see my loved ones across the road without being ready for it.  It turned out to be a grand idea because they were running for a bus.

I guess because nobody rides UTA buses anymore, because they just aren’t cool enough…the bus was empty!  A bunch of people followed us and we filled that sucker right up! Here is my beautiful sister on the bus ready for the time of her life! Emmy and I together Jonny Boy holding up the fort Dave in the back and Paul somewhere up front and higher up than anyone else and then we arrived and nothing…no…nothing can explain the stage they put together for the show.  It was 360 degrees so everyone had a good seat.  We picked GA so we could dance the whole time close to the stage and the place we stood was better than any we have been before because of their set up. There were hundreds of littler screens that spread out to make a funnel tv screen.  It all started out at the top smashed together (like the picture of Bono 2 pictures up) and then stretched like the picture above. Well he was so excited that he couldn’t make a normal face.  He actually bought this U2 shirt so many years back that it was almost a belly shirt on him.  He has washed and dried it so many times, it looked like it was his two year old son D.J.’s shirt.  Faded and worn just like the Utah Jazz shirts he worn until they were thread bare.

I teased him, I couldn’t help it.

After all, this is what sisters are for. And THIS picture was my absolute favorite picture of the night!

I stuck my head in last minute and ended up looking like a Llama and if you know me at all, you know this is a horrible thing that made me laugh super hard.  My eyelashes, eyes, and what is that nasty spoon I swallowed still doing stuck in my throat anyway?

I guess if I’m a Llama, I can get away with it…

I love my sister’s face and Dave and Paul are also priceless.  Just check out my siblings eye color…stunning!  Mine are more like milk spilled on a blue.  Sometimes this makes them look greenish *yahoo*, sometimes grayish, and other times just milk spilled on blue eyes. Some of my favorite songs they sang were:

Still haven’t found what I’m looking for *will he ever?*

Thank you my family for our beautiful day and thank you *the edge* for playing the guitar just for me.