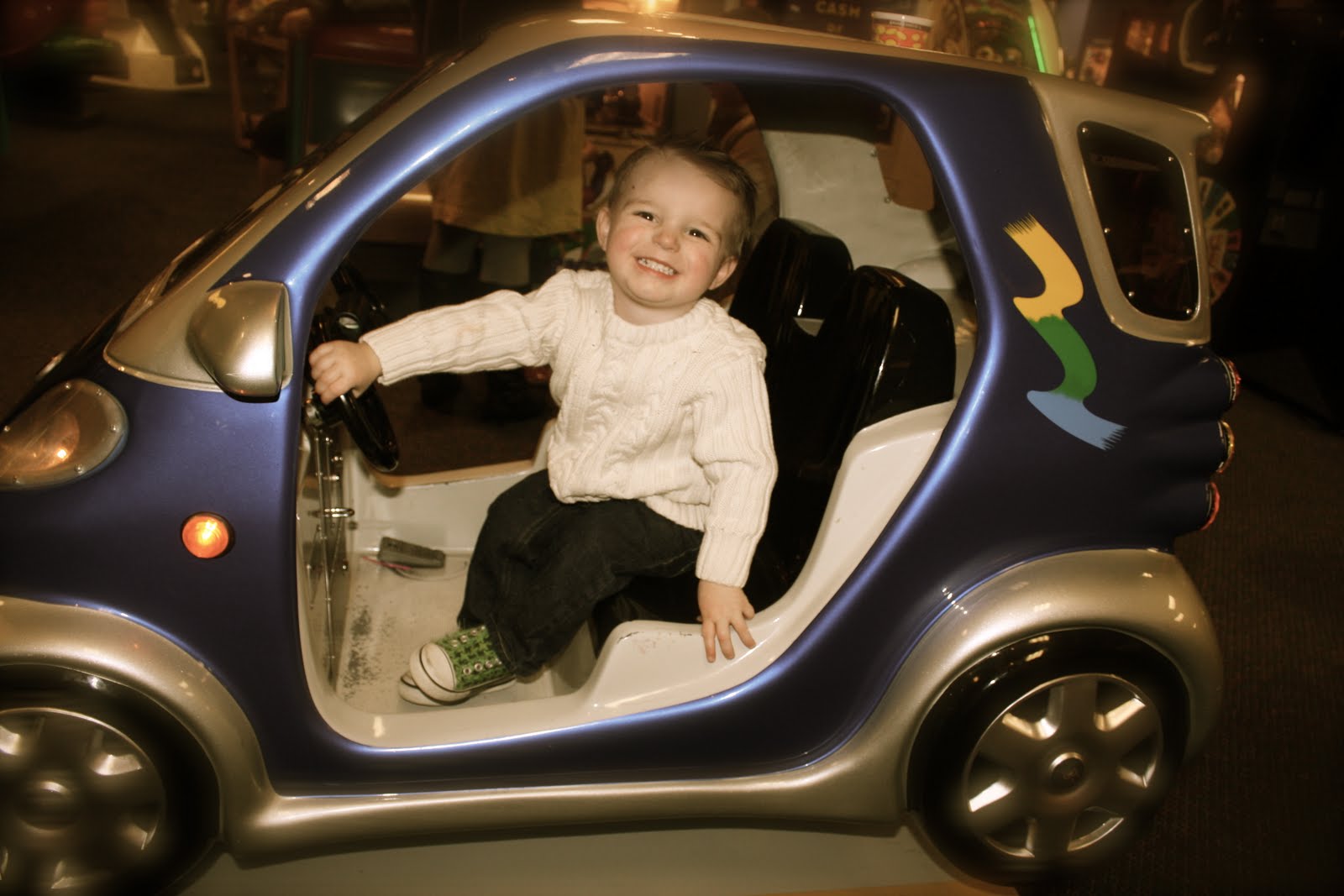 He actually turned 2 a few months ago, but I am finally getting around to all of my backed up pictures!  For his birthday we decided to go to Chucky Cheese because he loves it there. Bug had just had her party there a month before hand and it was a huge success!

{personally I don’t wouldn’t have chose it, but alas..it wasn’t my birthday!} He spent the entire night pointing at things. I remember pointing too when I was young and I witnessed big harry singing monsters for the first time.  Really there eyes are enough to do me in, not to mention when the song is over they all go into this coma like trance.

It is really a bit spooky in my opinion. But Handsome didn’t think so!

He was in seventh heaven with all the flashing lights, pizza, and presents! It’s so cute to follow him around and watch the games he decides to play.  It’s usually something to do with cars.  I loved watching him fill his pockets full of tokens and just run wild! Bug did a bit a running wild also!

This is the best way I know to teach my kids to earn a lot of tickets.  Forget chucking the ball up the ramp, just run yourself up the ramp and voila!! And then it was time to sing Happy Birthday to Handsome… And sing we did…

The first time he just looked around at all the family in awe, wondering why we all broke out in chorus but when we had finished he yelled,

So we sang the whole flippin’ song AGAIN!  It was so stinkin’ cute and everyone was laughing the second time because he was obviously SO proud that he was able to control us all! Na Na (yes, that’s what we call my mom AND Handsome’s biological grandma) made his day!

She made him a blanket that has “Lightening McQueen” embroidered on the front along with many other cars!  He LOVED it and sleeps with it every night. He looks to me, like he just won the publishers clearing house! And Na Na wins again with a special present for the other “twin”.  She didn’t want Bug to feel left out, so she spoiled her as well!  {smart Grandma}  It’s so weird to me that I have always called Handsome and Bug twins…now knowing that he really had a twin before he was born.

I think Bug was a gift to him so he could still have as close to a twin sister as he could.  Life works out in the most amazing ways. Handsome was lucky to get many gifts, but one of his favorite was his new three wheel trike!  He always wants to be like Bug outside, and now he can.  His little legs barely make it to the peddles but he has been practicing a lot and is doing a great job! Handsome’s biological Na Na sent up his little blue car from when he was little for him to open on his birthday.  When he saw it he ran over and threw it into the back of his trike.  It was so cute because you could tell he recognized it right away!  They also sent a hand cast of his little baby hand, a letter, some music for him to sleep to, and a little hat.

Handsome has grown SO FAST.

I couldn’t be more blessed than to have all my beautiful girls and a bonus son at the end.