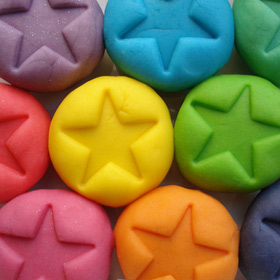 Apparently three year olds like play dough in home made enchiladas.  I tried to tell bug that the rest of the family may not agree, but she wasn’t having it.

I fished out one big chunk and am leaving the rest to fate, because I ain’t makin’ another batch. It’s a crap shoot who will take the brunt of my end of summer exhaustion…hopefully it’s a kid that deserved it today and not my undeserving husband.