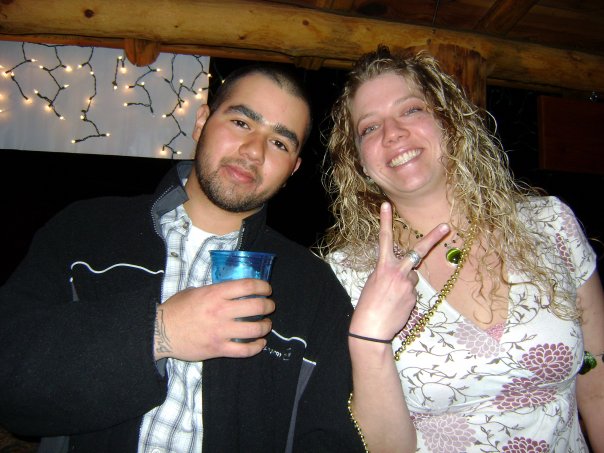 Life is full of twists and turns

Today my friends is a down.

I found out yesterday that one of our friends in the Ellison family died late Friday night after loosing control of his car and hitting a semi head on.  Leonard Portillo was such a sweet and calm guy that will be missed by many.

Words cannot express our sadness for sweet Brittany as she faces her trials ahead.

The Ellisons lived across the street from Jon most of his life.  They were one of those families that crosses from mere friendship and neighbors into family.  Jon hunted and worked with their boys Rock, Skeeter, and Zach and formed a friendship that will last forever.  He looked at their daughters Brittany and Star like little sisters and loved them as such.  And the parents…?  Jon was just as close to them.  He even calls the mom Jamie, “his mom”.  So you can see that this hits home for him when he found out that one of his “little sisters” is now hurting so bad.  Over the passed 17 years they have also become another one of my adopted families.  We have been through a lot with them and wouldn’t miss the funeral for anything.

Jon and I plan on jumping on our plane after church today and flying to Mack’s Inn in Idaho West Yellowstone. This is where a lot of the family is living right now as they run the resort.

It will be nothing less than an adventure landing on a small landing strip in the middle of nowhere.  I have only had small rides on our plane thus far and am excited and nervous at the same time to hop on with my bag, Jon, and our friend Nick the pilot and soar 30,000 feet (or whatever it is) in a six seater.

I would normally get out my magazines on a plane ride or fall asleep, but I highly doubt any of the sort will happen today.  I will be peering out of the windows with huge ear phones on that I’m supposed to wear, as my imagination swooshes and swirls with every scenario that can happen in a plane.

I can’t help but think of “Nie Nie” as I embark, as much as I hate to put that into writing.

What do you expect? I am a mom blogger, I live in Utah (very close to her) and my husband is getting his pilots license.  I know things like that rarely happen, but they do.

At the same time I feel blessed to have the option to make it because if we had to drive 6 hours both ways I doubt we could have.  So pray for my nerves, pray for Jon’s heart, and most importantly pray for our forever friends “The Ellisons” that are heart broken and the two small boys and wife that Leonard left behind.  I am sure I will be taking a million pictures, especially with my nervous energy at work.

We will return Tuesday night with a renewed appreciation for life and a stronger conviction to make every second count.

Ta Ta for now my friends!