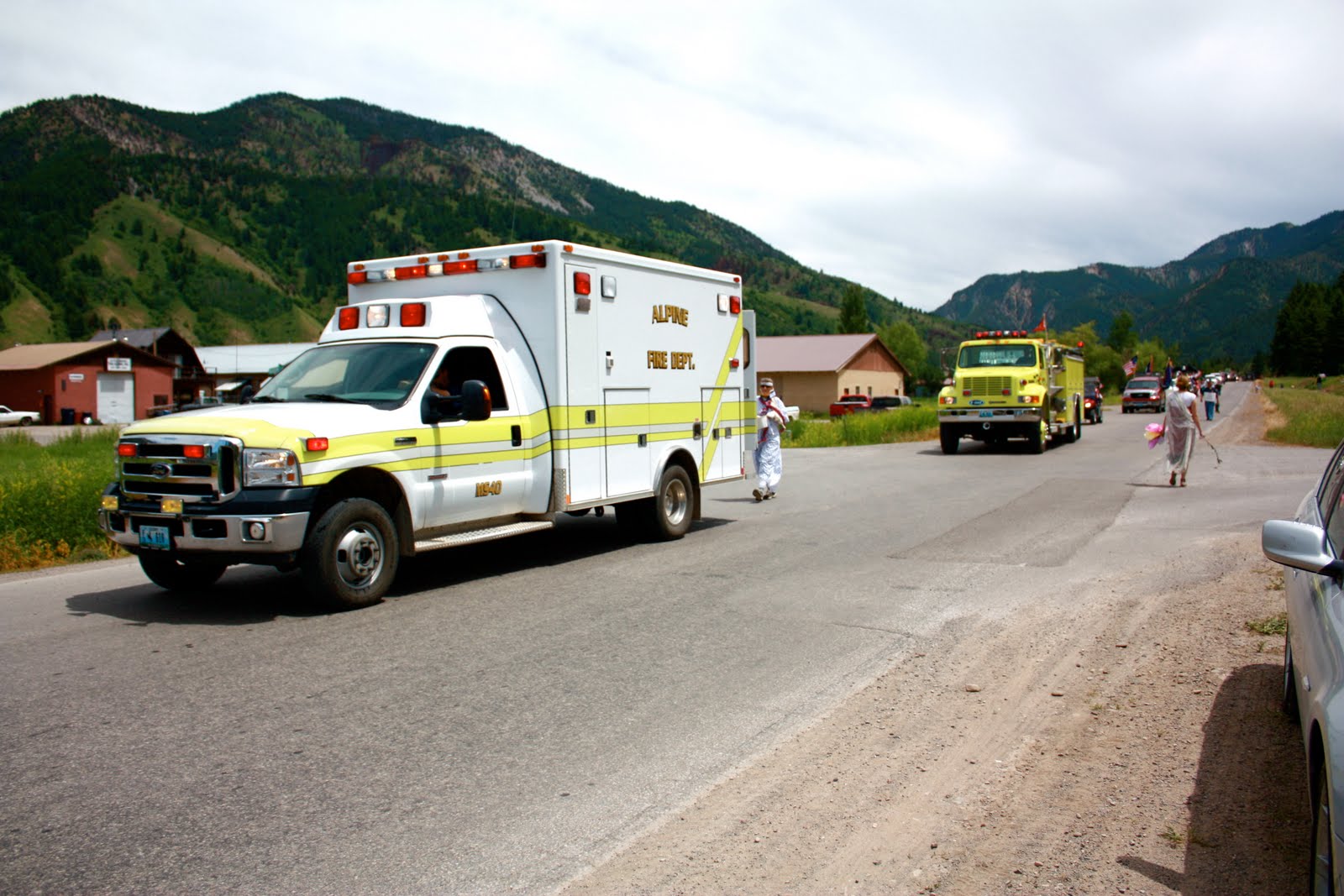 Unless that is, if it is the parade in Alpine Wyoming.  It is about 15 minutes long and the sun isn’t beating down on you making you want to jump into a swimming pool.  It was a comfortable 75 degrees and the sky was blue.  There weren’t 8 million people fighting for seats on the hot asphalt and sleeping over the night before and defending their “spot” as if the last food on earth.

We jumped on our four wheelers 3 minutes before it started and drove down the road to the beginning of the show.  We hopped off just in time for the candy to come flying at us and took some pictures. First off, I had to embarrass my girls and made them take a picture with the cute fireman.  You can tell this boy is from Wyoming, because of his farmer tan.  I made Jon dig out some cash to donate, took his picture and then let him move on. Don’t you just LOVE the shirts I found at the going out of business antique shop!?  I bought them all for a dollar and put them on the whole family.  We were laughing the whole time because, well they were AWESOME!  The original price was $25.00 each.  I don’t know who would pay that, well obviously nobody because they had been sitting there since 1996.  The tag said so! Scott is allowed to stay around as much as he likes.  He was all for the crazy shirts and wore a big smile along with the hideous get up.  I am so happyRoozhas great taste in men!  I expect all the girls to do the same.  He set a pretty high bar for them on this trip in my book!  He comes from a family with FIVE BOYS and one sister!  When I saw pictures of them I about died!  It was like our family, but in reverse! Scott found this sweet vest and tie that matched and we made use of it on two people! This chick was awesome!  I don’t know who she was, but she posed and I shot! I even got Mr. Little Jon to wear a shirt…yes I owe him BIG, but what else is new? Bug filled up my camera case with candy for lack of a better container. The highlight of the parade for me was the stupendous band because they were so coordinated. Camille couldn’t help it and yelled,”Janae! You are LATE!  Jump on your float!”

I looked down are realized that my shirt was probably made for this same float last year because I matched perfectly!  I didn’t miss a beat, and ran up to the lady. And made a new best friend.

I just HAD to pose with her and I am pretty sure she understood why.