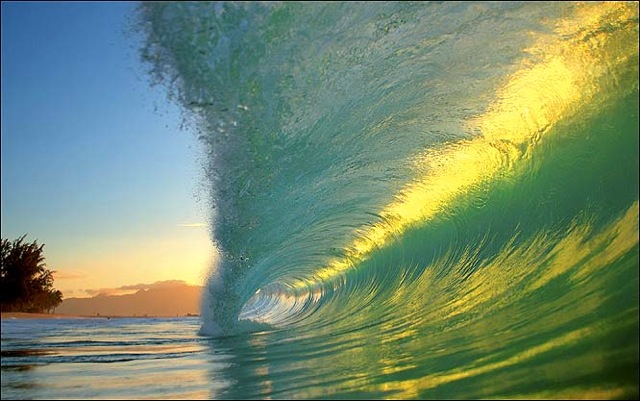 I reached my time limit for this post, and still couldn’t figure out the spacing…sorry 🙂

It all started in 2007 when Clark ‘s wife wanted a nice piece of art to decorate a wall.

Voluntarily, Clark grabbed a camera, jumped in the water, and starting snapping away capturing the beauty and power of monstrous Hawaiian waves from the inside out.

“Clark’s view” is a unique view of the ocean that most will only be able to experience safely on land while studying on of Clark’s photos.Now with a camera upgrade and an itch to get that better shot, Clark has taken this on full time and has moved his office from land, to the inside of a barrel.

Since the recent stir of Clark ‘s work, his images have been run

These incredible images of waves in the Hawaiian Islands were taken by Clark Little, the number one photographer of surf.He is dedicated to photographing the waves and has published a selection of his best images.He captures magical moments inside the tube as surfers say. You really have to blow up these pictures to do them justice! Nobody can go back and start a new beginning, but anyone can start today “If you wait to do everything until you’re sure it’s right, you’ll probably

never do much of anything.” Win Borden “The doors we open and close each day decide the lives we live.” “Life is full of beauty.  Notice it.  Notice the bumble bee, the small child, and the

smiling faces.  Smell the rain, and feel the wind.  Live your life to the fullest potential,

and fight for your dreams.” Ashley Smith “You never find yourself until you face the truth.” Pearl Bailey “The search for truth is more precious than it’s possession.” “Keep away from those who try to belittle your ambitions.  Small people always do that,

but the really great make you believe that you too can become great.”

I found an article that I wanted to post today.  It speaks for itself!

SYDNEY (AP) – In those bleak moments when the lost souls stood atop the cliff, wondering whether to jump, the sound of the wind and the waves was broken by a soft voice. “Why don’t you come and have a cup of tea?” the stranger would ask. And when they turned to him, his smile was often their salvation.

For almost 50 years, Don Ritchie has lived across the street from Australia’s most notorious suicide spot, a rocky cliff at the entrance to Sydney Harbour called The Gap. And in that time, the man widely regarded as a guardian angel has shepherded countless people away from the edge.

What some consider grim, Ritchie considers a gift. How wonderful, the former life insurance salesman says, to save so many. How wonderful to sell them life.

“You can’t just sit there and watch them,” says Ritchie, now 84, perched on his beloved green leather chair, from which he keeps a watchful eye on the cliff outside. “You gotta try and save them. It’s pretty simple.”

Since the 1800s, Australians have flocked to The Gap to end their lives, with little more than a 3-foot (1 meter) fence separating them from the edge. Local officials say around one person a week commits suicide there, and in January, the Woollahra Council applied for 2.1 million Australian dollars ($1.7 million) in federal funding to build a higher fence and overhaul security.

In the meantime, Ritchie keeps up his voluntary watch. The council recently named Ritchie and Moya, his wife of 58 years, 2010’s Citizens of the Year.

He’s saved 160 people, according to the official tally, but that’s only an estimate. Ritchie doesn’t keep count. He just knows he’s watched far more walk away from the edge than go over it.

Dianne Gaddin likes to believe Ritchie was at her daughter’s side before she jumped in 2005. Though he can’t remember now, she is comforted by the idea that Tracy felt his warmth in her final moments.

“He’s an angel,” she says. “Most people would be too afraid to do anything and would probably sooner turn away and run away. But he had the courage and the charisma and the care and the magnetism to reach people who were coming to the end of their tether.”

Something about Ritchie exudes a feeling of calm. His voice has a soothing raspiness to it, and his pale blue eyes are gentle. Though he stands tall at just over 6’2 (an inch shorter, he notes with a grin, than he used to be), he hardly seems imposing.

Each morning, he climbs out of bed, pads over to the bedroom window of his modest, two-story home, and scans the cliff. If he spots anyone standing alone too close to the precipice, he hurries to their side.

Some he speaks with are fighting medical problems, others suffering mental illness. Sometimes, the ones who jump leave behind reminders of themselves on the edge _ notes, wallets, shoes. Ritchie once rushed over to help a man on crutches. By the time he arrived, the crutches were all that remained.

In his younger years, he would occasionally climb the fence to hold people back while Moya called the police. He would help rescue crews haul up the bodies of those who couldn’t be saved. And he would invite the rescuers back to his house afterward for a comforting drink.

It all nearly cost him his life once. A chilling picture captured decades ago by a local news photographer shows Ritchie struggling with a woman, inches from the edge. The woman is seen trying to launch herself over the side _ with Ritchie the only thing between her and the abyss. Had she been successful, he would have gone over, too.

These days, he keeps a safer distance. The council installed security cameras this year and the invention of mobile phones means someone often calls for help before he crosses the street.But he remains available to lend an ear, though he never tries to counsel, advise or pry. He just gives them a warm smile, asks if they’d like to talk and invites them back to his house for tea. Sometimes, they join him.