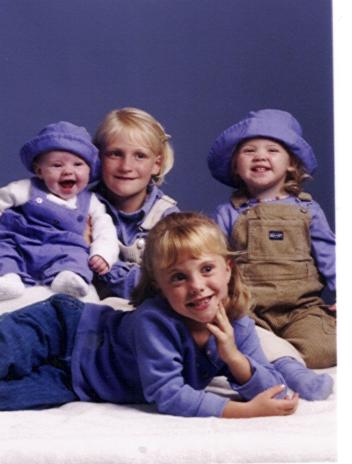 I wrote a post on the “Help Me Grow” blog today and wanted to send anyone over there that is interested in finding out more!  Also I posted another letter on my projecttoday, written by my sister Camille *thanks Camille!*.  My attention is being divided by a few different things now and I am going to have to get up earlier in the day to fit it all in! None the less, I didn’t want to miss the post I have in mind today because it is a special day!

Today is my nieces birthday.  I don’t think I will get the chance to post about every niece or nephew’s birthday, but Shauntyl is special.  Shauntyl is special because I raised her for four years of her life.  I guess that isn’t what makes her special, but I think of her in a different way because of it.  Anytime people spend countless hours helping someone, you can’t help but love them.

Shauntyl and I went through a lot together.  She came to live with us at a very rough time in the history of our family.  I was only 22 and had given birth to Whitney just a few weeks before when it all happened.  Shauntyl had been going through some really hard things with her family, a lot of which I don’t feel comfortable adding to my public blog so if I sound a bit vague,  it is by design.  She needed a new home, and unless I wanted her to be given to the states custody, my husband and I would need to find a way to support her.  Without money or stability, we dove in and gave it our best shot.  Luckily the courts trusted us because I had been a nanny for the man in charge of custody cases for our whole county a few years before!  When she moved in, she slept on the couch for several months because we lived in a one bedroom home with four kids.  Syd and two year old Kinley slept in the attic that we finished for extra room.  It didn’t have a door, closet, or straight walls but I made it cute by adding stencils on the wall making it look like Noah’s Ark.  There was a drop stairway that we put a toddler bed over to keep it covered.  A little girl actually fell through it on Kinley’s birthday party once!  Luckily it was positioned (by luck) right over our bed below.  Whitney was a new baby and in a bassinet in our bedroom…and well Shauntyl was on the couch.  She was wanted and loved, but it wasn’t the best situation.

Over the next several years we worked thorough a lot of really hard things together.  We visited the counselor 2 times a week trying to attack the real life monsters that she had gained through life’s experiences.  I remember holding each other and crying together as we faced memories head on.  Some of the worst things she didn’t even recall until three years after she came.  When it all came out of her memory, it wasn’t gradual, it flooded out of her like she couldn’t handle holding onto it for one more second.  I wrote what she said as fast as I could because I was afraid it would slip back into her subconscious.  I was appalled at the mere visual I had, how could this be her reality? This little blond haired girl with such a calm, sweet disposition, looked to me for advice on how to deal with such things as abuse, neglect, and hurt.  All of which came from several people that she was supposed to be able to trust and love.  How do you explain those things to a seven year old?  How do you tell them that the world can be a cruel and sometimes unbearable place when she should be able to focus on princesses and play dates.  How do you relay what real love is when all she had felt was twisted and pathetic ways of showing it?  In what manner do I share with her how beautiful she is and that the world is still at her fingertips, even though she was just trying to survive and protect her younger sister.  The job was mentally exhausting and so disheartening, I can’t express.

I often felt like a failure.  I still do at times.  I remember feeling resentful to some for taking actions that would change my life and the life of my kids.  I felt like I wasn’t enough for her because I didn’t feel the same about her as I did my own kids.  I loved her more than anything, but it did feel different, and this ate me up inside.  I remember complaining to Jon about taking 4 hours a week for counseling for her and having to leave my other kids when they needed the time with me so badly themselves.  I was not perfect and it hurt.  It hurt as I did it, and it still hurts.  The truth is, and what I tell myself now, is that I can honestly say that I did my best.  I gave everything I had at that time in my life, and that’s all anyone can do.

Eventually we got her back living with her mother, that loves her very much.  The hardest thing is hearing that some believed I kept her from her mom for selfish reasons.  How can they say that?  I was only acting to save her from living with someone she didn’t know.  I was acting out of love.  I was.   I know that Shauntyl knows this and I guess that is all that matters.  It isn’t easy being a foster parent.  There is a wall that has to be there whether you want it there or not.  A wall that protects you from the hurt that will inevitably come when the child leaves.  Yes, the wall had to be there because if it hadn’t, I would have had an even harder time letting her go when it was time and believe me it wasn’t easy.  I loved her, I do love her and all I could do was hope for the best. When all was said and done, I learned more from Shauntyl than she learned from me.  She taught me the invaluable lessons of forgiveness, patience, and silent strength.  Lessons from a seven year old.  A seven year old that taught me.

Thanks for being you Shauntyl, and I love you.  Happy Birthday! I found this old picture of Shauntyl with the girls.  She is the one with the really light blond hair 🙂