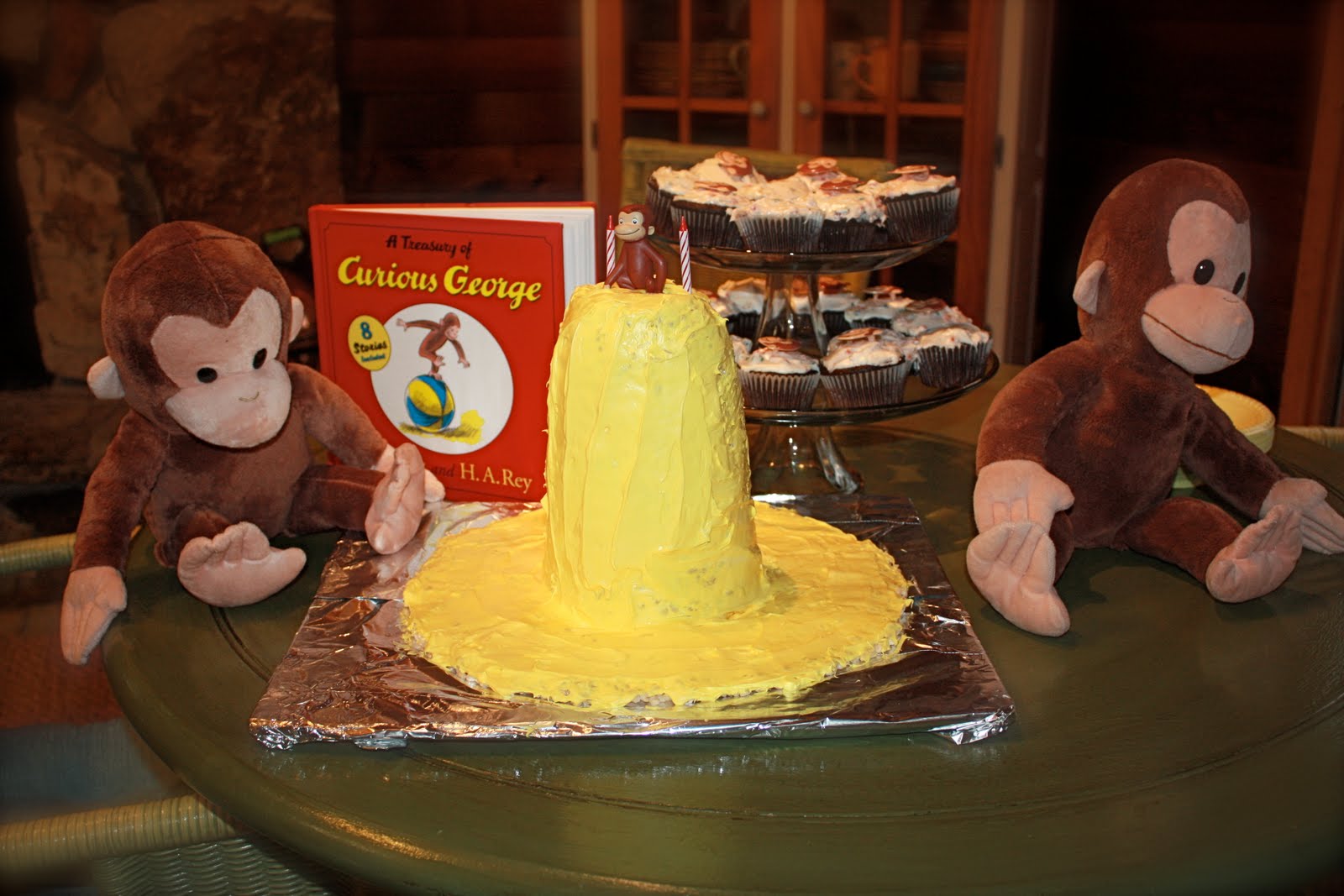 Have you ever seen such a party? This is the party my sister threw for her son. It made ME want to have a Curious George 35th Birthday party this fall! She had unbelievable food and loads of cute decorations. It was even complete with a photo booth for family pictures. These are my parents below. WELL, where did you think I got my craziness from in the first place?!

Now we have my brother Dave, his wife Emmy, and their kids D.J. and Madisen. TOO CUTE. Next is my brother Scott, Amy and Carter. There is another one baking in the oven!! YEAA! This is my talented, beautiful sister Camille. She started planning this party at least a month in advance! I think she paid more attention to detail at Jackson’s birthday than I did on my wedding. Maybe not, but it looked like it. Camille had the kids play a spazy fun game where they tied balloons around their ankles and ran around to music trying to step on the other kids balloons. They loved it! D.J. had the time of his life. So did Ella. Being the oldest participant and LOVING to WIN, she had a slight advantage. Being that D.J. is like his dad, he also loves to win. Looks like the girls win again just like when we were younger! ha ha 🙂 I couldn’t help but capture him in complete agony! This reminds me of a story that can’t go untold. Now be aware that if my brother Dave were writing this post, it would probably be quite a different story, but this is my blog and therefore I have the right to tell it as I please.

I was the oldest of five kids. I was always babysitting, which comes along with the birth right of the eldest *right*? That’s what my parents told me anyway, and what I tell my kids too. Well, it was one of those nights when mom and dad were out. One of those nights meaning Scott was probably tied to the bunk bed with my dads neck ties, a banana was more than likely drying on the ceiling from the latest food fight, and Dan was stabbing my parents wooden door with a butter knife trying to get to Dave after he had tormented him. All of these things didn’t happen the same night, but did in fact happen.

On this night that will never be forgotten, I was trying to control Dave that was still at this point smaller than myself. This was to my advantage because I could use brute strength to get him to do what I wanted. I can’t remember what led up to the event (Dave probably would) but I do remember sitting on him in the front room. I sat on him because he bugged me, because he thought he was always right and well should I say STUBBORN!

My control came more out of teasing at first until he started to get mad. I didn’t want to let him up out of fear that …well I didn’t know. The outcome in that situation was never very clear. The longer I sat, the more I realized I had sat too long. The longer I thought about it, the thought of jumping off him and trying to run away fast enough scared me to death. So I just sat.

It didn’t even phase me when he explained that he had to pee. “Ya right, this is another ploy to get me off!” I thought. I kept that same belief until it happened. The garage door below us opened! It was utter and certain death for one of us. I sprang with everything I had to run away before my parents saw how I was able to keep the kids under perfect control. My secret and tactics were blown!! I ran for my life!

It was all a blur…even blurry as I glanced back in sheer horror to see Dave running after me as he unzipped his pants! “WHY IS HE UNZIPPING HIS PANTS!?” I thought. My question was soon answered as he pulled down his tighty whities also and proceeded to pee as hard and fast aimed AT ME as he ran! Did he hit me you ask? YES. He hit me, and the walls, floor, and himself. He faded into the distance as I turned and darted down the stairs to the safety of my bedroom. The next thing I heard was Dave screaming because my dad spanked him for peeing all over the house in anger. I think that was a good punishment, don’t you? Who pees on their sister when they are mad? Even though I giggled from my room, I couldn’t help but feel a tiny bit bad for him. After all, I may have done the same thing.

Now that I have gone WAY off course, I will return to the party and my super model nephew Jackson. See him in the blue shirt? He is a doll and should be in magazines. He received all kinds of gifts and lots of attention from both sides of his family. Oh, perfect timing. Below is my brother Dave. Some day D.J. will chase Madisen and pee on her when he is mad and we will see how Dave really felt about being spanked for peeing on me! See that Curious George hat CAKE! She made it out of rice crispy treats to keep it strong. Pure talent. I told her she is setting a pretty high bar for the rest of his life, and his siblings. I try to keep my kids not expecting much, then they are excited to even get a cake.

What a party Camille. Good luck keeping this boy all for yourself. He is so sweet and calm. He snuggles and says nice things. It is only a matter of time before girls (like mine) will be calling him and giggling at the sound of his voice.