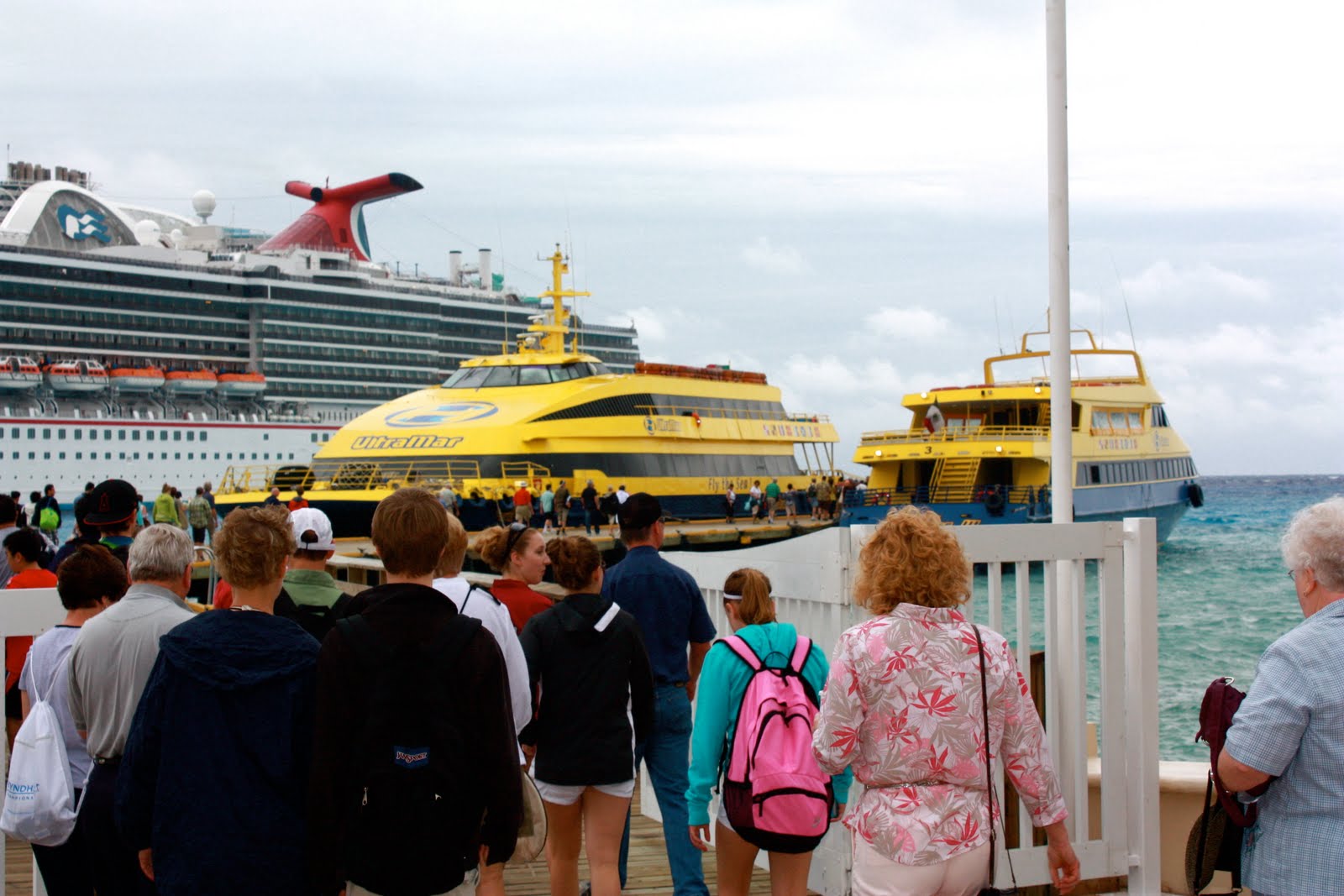 We started off our adventure to Cozumel on separate boats that took us into the mainland. It was a Rockin’ and a Rollin’ to say the least! I was a bit concerned I might loosemy lunchHUGE buffet breakfast! I am pretty used to how a boat feels because we go boating all the time on lakes, but rocking side to side feels a bit different. It helped looking out the side of the boat to keep my bearings. I looked like a dog perched on the passenger side of his masters car. The boat held 500 people! It was crazy and I had to laugh at all the people running out onto the decks. I thought I would be prepared (because I am a boy scout) and got the bag ready that they passed out to all the weak stomached passengers. There was a mirrored ceiling, so I had to snap a pick. Look closely for Jon’s “Where’s Waldo” surprise… I didn’t catch this until I was posting pictures. I guess he had enough

of my happy clicking picture finger! I can only imagine how Christopher Columbus felt sailing through all of these beautiful islands and finally landing on the white sanding beaches! When we arrived it was a bit sprinkle-y, so Jon paid way too much for a rain jacket to keep myself and my camera dry and happy. Spencer continually laughed at Jon’s too loose wallet over the duration of the trip.

It was really quite funny watching Jon’s skill of a giving combined with Spencer’s talent of budgeting and negotiating. It makes for a hilarious combination. Spencer would work hard to get us the best deal with the locals, speaking in Spanish and negotiating while Jon was slipping twenties when Spence wasn’t looking (or pretending not to). Jon just wants to help the people out because they are working hard, but we definitely spent more on the trip! Melinda opted for her cruise ship towel to keep her warm and dry. The Myan ruins were out of this world! It was one of my favorite parts of the trip. I LOVE learning about different civilizations and cultures. If I could finish college I would consider diving into this area. The guide of our tour assured us that the Myan calender only ends on December 22, 2012 and starts over again. It isn’t the end of the world. This was calming after seeing the movie 2012 and reading in depth afterward on Wikipedia on the subject…followed by several nightmares! Yes, we are POSER DORKS with TOO much time and digital camera’s on our hands! I love this picture of Spence and Melinda! It is my favorite of the whole trip. Spencer was teaching us about the history of the Book of Mormon and how there is speculation that these ruins are where the Nephites and Lamanites lived after traveling through the wilderness. It makes sense with all of the description in the scriptures and I loved replaying the stories in my mind as I walked around and felt of the past. I love seeing things for myself after I read about them. It brings it alive. After studying the Book of Mormon my whole life, it was very interesting and amazing to me. The Myans were a brilliant people. They built all of their homes perfectly so you could tell time on each of the buildings. There were holes cut out in the stone so that every morning and night the sun and moon would shine through and tell the time of day, month, year and so on. It was miraculous how they figured it all out with the stars to make their calender. Honestly I can’t explain how their calender works, it only makes sense to me as I read about it and heard our guide Ernie talk about it. It is very interesting and I would recommend anyone to study about it. Fascinating is all I can say.

They had a stick on top of one of their buildings right on the cliff. When the wind would blow in a circular pattern, it was signaling to them of a hurricane because it went sideways through the hole. It would blow and the people would go for cover. The whole city was surrounded by a huge rock wall, that is also talked about in the scriptures. I would love to study more about it and go back someday! There were many homes that have never been excavated and still lay underground. There are artifacts and people buried there, but they leave it untouched. I am sure someday there will be more to visit and see. Great excuse to go back!

After we were done, we walked back and I stopped dead in my tracks when I saw the most perfect blanket that was woven on a loom by the Myan people. It is bright with yellows, reds, blues, purples, and many more colors. It is a treasure that I took home with me that will always remind me of that special day.

We didn’t want to be late to the bus, because I was the one that held it up at the store (smacking everyone’s head with my bags as I ran back ont) but we had to stop and grab some authentic Mexican food. It was to die for!! I have had all kinds of Mexican food, but this topped it all. We picked up my necklace that we had made there on the way out. It is silver with 2 hanging charms. One spells Jon in Myan, and one spells Janae. It’s our little BFF’s necklace that I wear around my neck to remind me of the trip and the

truthfulness of the Book of Mormon. I had to add some pictures of the blanket in my room for Melinda because I CAN’T believe how well it matched.  I didn’t even realize it at the time, but I guess they are the colors I am drawn to…so it all fits somehow.  My home is very eclectic, like my personality I guess.

I love surrounding myself with colors, sounds (music), pictures, smells (candles..I’m not a great cook), sayings, and doo dads that remind me of happy things!

Oh, and the snowflakes above my bed, my kids made those for us and taped them on the ceiling.  I love them!  I love to watch them blow in the breeze from

our skylights and their little inscribed names.  They have been there for about

a month and I can’t bring myself to take them down! This is the necklace that Jon bought me.  The kis in the village made them for the tourists

that wanted them…That’s the story they told us anyway so we would buy it!! (haha)